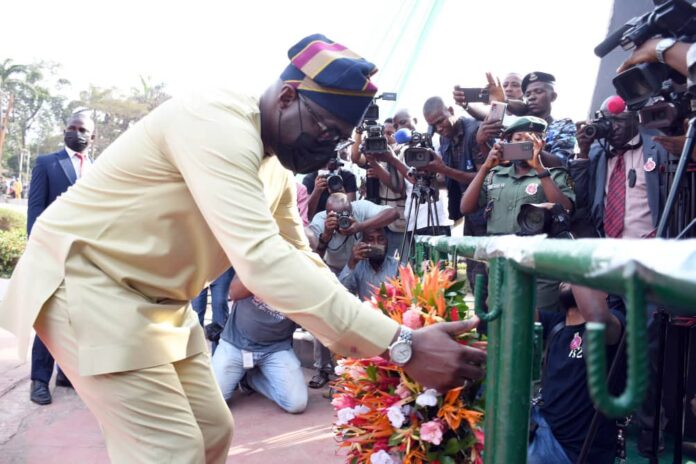 Governor ‘Seyi Makinde of Oyo State, on Saturday, January 15, 2022, reiterated his administration’s determination to ensure the toils of the nation’s fallen heroes don’t go in vain.

The governor, who was speaking at the grand finale of the year’s Armed Forces Remembrance Day, held at the Remembrance Arcade, Government House, Agodi, Ibadan, promised to keep encouraging and working closely with members of the armed forces and the survivors of the fallen heroes and heroines.

A statement by the Chief Press Secretary to the governor, Mr. Taiwo Adisa, indicated that Makinde equally performed the traditional wreath-laying at the 2022 Remembrance Day celebration.

The governor added that his administration would keep encouraging and working closely with members of the Armed Forces to provide a safe and secure environment in Oyo State.

He commended the officers and men of the security agencies for their efforts in battling insecurity in the state, urging them to continue to do their best to ensure that peace reigns in the state and the country at large.

He said: “For Nigerians, some people made sacrifices for us to be where we are right now and also paid the ultimate price.
So, I believe we should not allow their toil to go in vain.

The Chairman, Nigerian Legion, Oyo State Command, Evangelist Julius Ogunkojo, also appreciated the Oyo State Government for improving the welfare of the dependants of the fallen heroes in the state.

He, however, appealed to the government to continue to assist the veterans and dependants of the fallen heroes so as to make life more meaningful for them.

According to him: “We want to appeal to the state government to continue to take care of our welfare.

“The governor has actually been of great help to us in terms of welfare and other germane issues.

“And we are also ready to support the security outfits in the state to ensure we are all safe.”

The ceremony witnessed laying of wreaths by Governor Makinde, his Deputy, Engr. Rauf Olaniyan, the General Officer Commanding 2 Mechanised Division, Major General GU Chibuisi, and widows of the departed heroes, among other dignitaries.

The occasion also witnessed the 21-gun salute and the symbolic release of white pigeons by Governor Makinde to usher peace into the state.