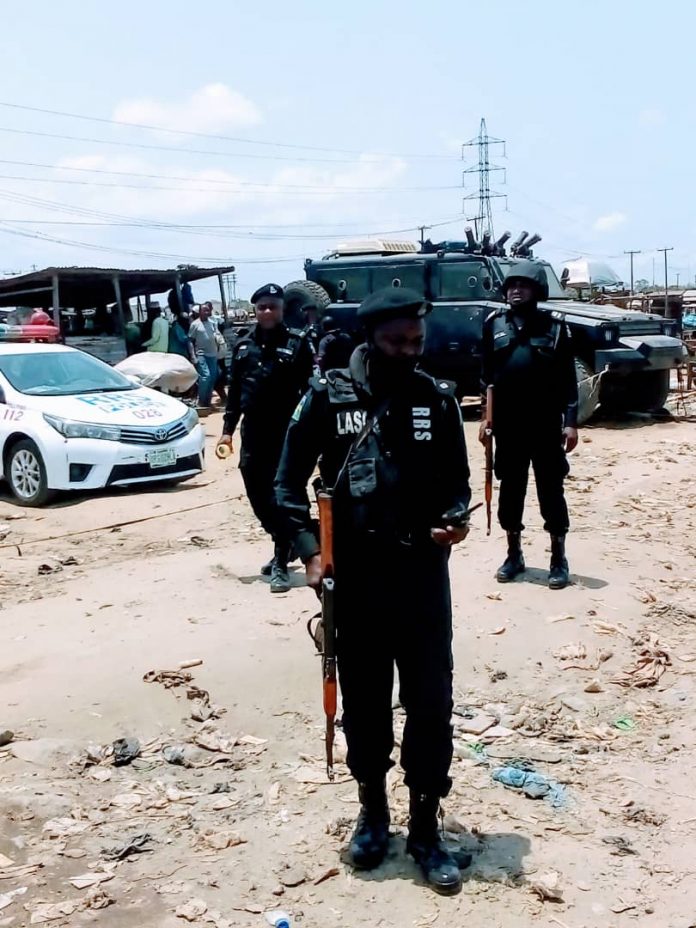 •Say rumours attacks on police at Lekki is false, mischievous

Following a disagreement among members of transport unions, particularly motorcycle units, as a result of increment in tariff on Monday, April 26, 2021, the Lagos State Police Command has restored normalcy to the Iyana Iba/Alaba Rago and Ojo areas of the state.

This was disclosed in a statement by the state police spokesman, CSP Olumuyiwa Adejobi.

According to Adejobi, Commissioner of Police in the state, Hakeem Odumosu ordered for immediate deployment of additional police personnel to the area to maintain law and order, as he also asked the Area Commander, Area E Festac, to personally be on ground to monitor the situation and invite the leaders of the affected motorcycle riders unit for an urgent meeting.

The PPRO said: “Lagos State Police Command wishes to debunk the rumour that the disgreement, not violence as being peddled in the social media, was between some ethnic groups.

“Without mincing words, the incident has no ethic colouration, but (was) a mere conflict between transport unions and their okada units on ticketing and increment in tariff.

“The Command therefore enjoins members of the public, especially those around the areas, including the students of the Lagos State University (LASU) Ojo, to go about their lawful businesses and studies respectively, as adequate deployment has been done to fortify security in the axis and by extension, in Lagos State in general.”

Meanwhile, the command has declared as false and mischievous, the rumour of attacks on policemen at Lekki area.

The police image-maker said also in a statement that the “Commissioner of Police, Lagos State, Hakeem Odumosu, has described the rumoured okada operators’ attack on police personnel in Lekki area of Lagos State, as captured in the viral video of Monday, April 26, 2021, as false and mischievous.

“The Command has carefully studied the video and noticed that the originator(s) of the video distorted the fact and raised false alarm, in order to cause confusion and create fears in the minds of the general public for reasons best known to him and his agents or sponsors as the case may be.

Setting the record straight, the command informed that “on Monday, April 26, 2021, at about 9:30am, the Divisional Police Officer in Maroko, was informed that some okada riders were on rampage by resisting the police from impounding their motorcycles at Lekki Phase 1 Gate, which falls within the restricted areas for okada operations in the state.

“The Divisional Police Officer then called for reinforcement and ordered his policemen to race to the place to take charge and restore normalcy.

“The policemen were able to curtail their activities and chased them to their hideouts, where 31 motorcycles were impounded and one of the leaders, one Mohammed, was arrested. Normalcy has been restored to the area.

“The Command wishes to reiterate that police operatives, in furtherance of the enforcement strategy of the command, will always maintain law and order across the state, especially on the enforcement of the restriction order and traffic law on operations of okada in the state.”

The PPRO said that the state government had made series of pronouncements on ban of motorcycle operations in some restricted areas/routes, including Lekki axis , and the order must be duly enforced.

“The Commissioner of Police therefore urges the general public to disregard the viral video and perceive the originator and his peddled rumour as baseless and mischievous.

“He enjoins Lagosians to go about their lawful businesses and support the police command in its bid to maintain law and order across the length and breadth of Lagos State.

“In conclusion, the originator of the video is being traced for necessary investigation,” the PPRO said.