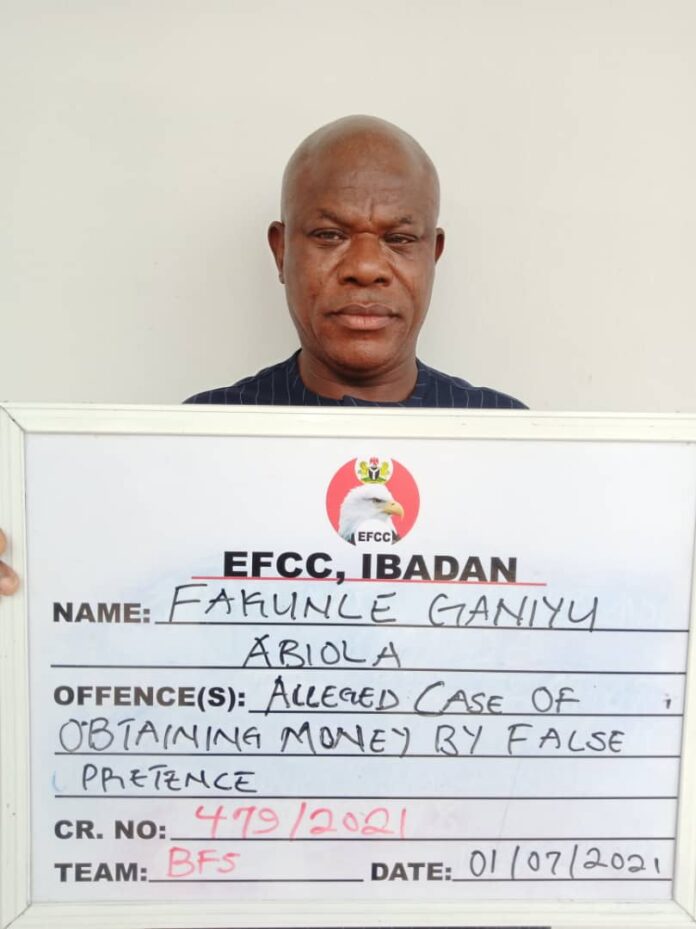 A man, Fakunle Ganiyu Abiola, had been arraigned before Justice Bayo Taiwo of the Oyo State High Court, sitting in Ibadan, by the Economic and Financial Crimes Commission (EFCC), Ibadan Zonal Command on a count charge of obtaining under false pretence.

He has, however, been remanded in EFCC custody pending the hearing of his bail application.

Thenewsbearer gathered that sometime in 2017, Fakunle had promised to assist his victim in securing admission into a United States university for a fee of N800,000, but after collecting a deposit of N300,000, the victim did not get any admission that was promised him or a refund of the deposit paid.

The charge read: “That you Fakunle Ganiyu Abiola on 6th of December, 2017, at Ibadan, within the jurisdiction of this honourable court, with intent to defraud, obtained the sum of N300,000 (Three Hundred Thousand Naira) ) only from  Oladejo Timothy Olusola, through your account domiciled at United Bank for Africa Plc, with account number  2013788397, when you falsely represented to him that you can secure admission for him at a university in the United States of America, which representation you knew to be false and thereby committed an offence.”

The offence is contrary to Section 1(1) (a) and punishable under Section 1(3) of the Advanced Fee Fraud and Other Fraud Related Offences Act, 2006.

Fakunle pleaded not guilty to the charge, and based on his plea, counsel to the EFCC, Sanusi Galadanchi told the court that he was ready for trial to commence, but the defendant, through his counsel, asked for a date for the consideration of his bail application.

Justice Taiwo adjourned the case till August 19, 2021 for hearing of the bail application and remanded the defendant in the EFCC custody.