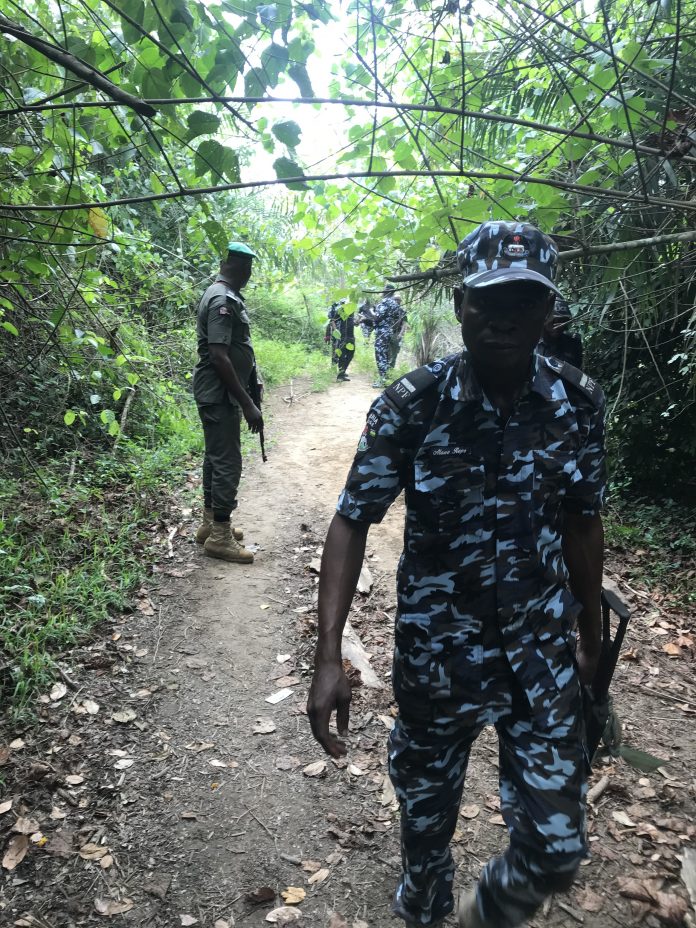 The search, which was carried out with journalists in tow, was led by the Assistant Commissioner of Police, Operations, Gbenga Ojo.

The search of the bush had begun at about 9am, from Onigambari axis, to link operatives with other spots on the wide expanse of land, up to the Ogun State border, where the abductors were tracked to.

During the search, at a spot, two herdsmen noticed afar quickly made a strange sound to the cows they were seen with, which the animals responded to by racing off, with the herdsmen disappearing among them.

On the return of journalists and some of the operatives, a man was sighted crouching in bush, as if he was on surveillance, but swiftly disappeared in the bush immediately he saw that he had been noticed by police operatives.

Though pursued, his deft moves in the thick bush made his arrest difficult, with the police cautious of any shooting.

In an interview conducted by journalists, the team leader, Assistant Commissioner of Police, Operations, spoke on the recent cases of abduction in the axis, saying that in the course of investigation, it was discovered that the abducted victims were usually whisked into nearby bushes.

ACP Ojo explained: “As part of security measures put in place by the command, we have deployed several patrol vehicles along the road, to check the activities of these hoodlums.

“We have also mobilised so many patrol teams – the tactical teams of the command, members of the vigilante group and local hunters – to comb the bush.”

He described the extensive nature of the forest that was being combed, which he said the journalists also experienced to a point before receding, as police operatives and their collaborators continued in the search.

According to the operations leader, “we have decided not to wait for them on the road. That is our plan. We will take the battle to them in the bush.
“We have started, and will continue, to ensure that the victims are rescued.

“Our plan, our aim, is to get to get these people arrested. We also intend to chase them out completely.”

Also speaking, the state Commissioner of Police, Ngozi Onadeko, reaffirmed the state command’s commitment towards ensuring that commuters plying the command’s axis of Ibadan-Ijebu Ode Road, residents and the good people of the state go about their daily activities without any fear of molestation or harassment.

In a statement signed by the state Police image-maker, DSP Adewale Osifeso, on Wednesday, the police commissioner noted the kidnap incidents that were being experienced at Idi Ayunre axis of Oluyole Local Government Area in Ibadan, but said that the command had embarked on a tactical sweep of the forest to destabilise criminal operations, establish police presence, rescue abductees and apprehend the abductors.

She averred that the security of lives and properties remained the first priority of the state police command, just as she enjoined the residents not to relent in sharing credible and timely information with the police for effective discharge of their duties.

Onadeko added that that security apparatus had been deployed to enhance the already-existing security architecture in the state, to enable the Muslim faithful enjoy a crime-free Ramadan period and beyond.