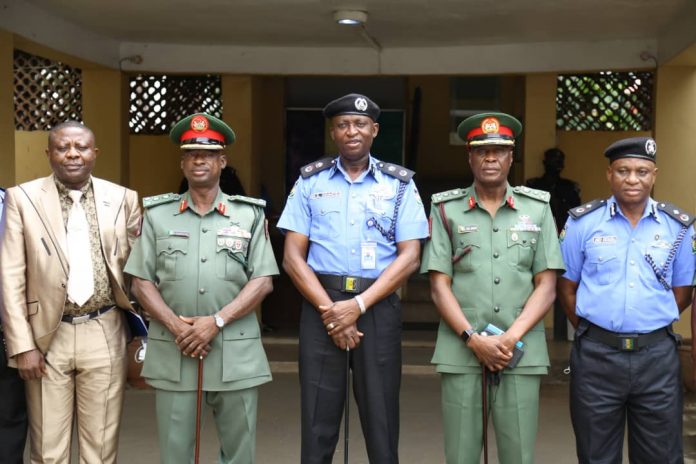 Commissioner of Police in Lagos State, Hakeem Odumosu, on Tuesday, April 27, 2021, expressed appreciation to the outgoing and the new Commanders of the 9 Brigade, Nigerian Army, Ikeja, Brigadier General Sale Kawugana and Brigadier General ML Saraso for taking the issue of the state security as crucial and important, prompting their visit to his office.

He made the expression while playing host to the two generals at the command headquarters, Ikeja, Lagos.

According to the state police image-maker, CSP Olumuyiwa Adejobi, in a statement, Odumosu commended the outgoing Commander, Brig Gen Kawugana, for his calmness and acts of professionalism he displayed within his short time in the Brigade.

The police commissioner promised to consistently relate and work with all the security agencies in the state, to combat crime and criminality.

The state police boss also emphasised the need for all security agencies, particularly the police and the armed forces in the state, to supervise their rank and file!and soldiers, with a view to curbing some of their overzealous and unprofessional acts while discharging their duties or relating with members of the public.

Such, he said, would alleviate rifts between the agencies and the public and save them from extra-judicial acts.

The outgoing Commander, during the visit, presented the new Commander, Brig. General Saraso, to the Commissioner of Police and the management team of the state command, as had been a practice in the system.

This, it was disclosed, was aimed at sustaining the already-established synergy and working relationship between the police command and the Nigerian Army.

The two generals applauded the efforts of the Commissioner of Police, towards having improved security mechanism in the state and thriving hard to embrace all security agencies in the state for quality service delivery.

In the same vein, Odumosu, received the Zonal Director of the Nigerian Television Authority, NTA 2, Network Centre, Lagos, Mr Ahmed Lawal, in his office, where they had extensive discussions on the security of the state and the need to collaborate on information management and enlightenment programmes to promote the concept of Community Policing in Lagos State.

The police boss siezed the opportunity to reinstate his commitment to eradicating cultism and other social vices, especially traffic robbery, in the state, as the officers and men of the command had been directed to discharge their duties and enforce every law in the state professionally as expected.