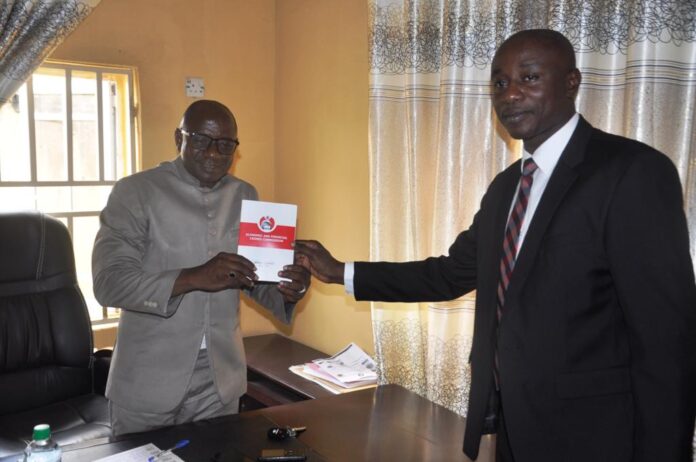 The Commander of the Maiduguri Zonal Command of the Economic and Financial Crimes Commission. (EFCC), Onwukwe C. Obiora, has called on the Nigerian Bar Association to join hands with the Commission to fight against economic and financial crimes in the country

The Commander, who was represented by the Head, Public Affairs Department, Egbodofo Olumide during a courtesy visit to the chairman of the NBA, Yobe State Chapter, Usman Nuhu on Thursday, July 29, 2021, expressed dismay that Maiduguri Command of the EFCC had not received a petition from Yobe State in the last one year.

According to Obiora, “the Nigerian Bar Association is a critical stakeholder in the fight, and there is the need for a robust collaboration and synergy, in order to tame the monster called corruption in Yobe State and Nigeria at large.”

He said further that “the Maiduguri Command, in previous year, did not receive a single petition, and we begin to wonder if Yobe State is completely devoid of economic and financial crimes.

“I plead with the NBA, Yobe State Chapter, to urge their clients who have fallen victim of any financial and economic crimes to write and submit petitions to the EFCC, as Yobe State falls under the jurisdiction of the Maiduguri Command.”

He urged the NBA to utilise the recently-launched mobile app, ‘Eagle Eye,’ which is available on Apple or Google Play Store, to report economic crime cases.

Speaking during the visit, Ali Ali of the Special Control Unit against Money Laundering of Maiduguri Command urged the NBA to register their law firms with SCUML.

In his remarks, the Chairman of the NBA ,Usman Nuhu thanked the Zonal Commander and assured him of robust support and synergy in the fight against corruption.