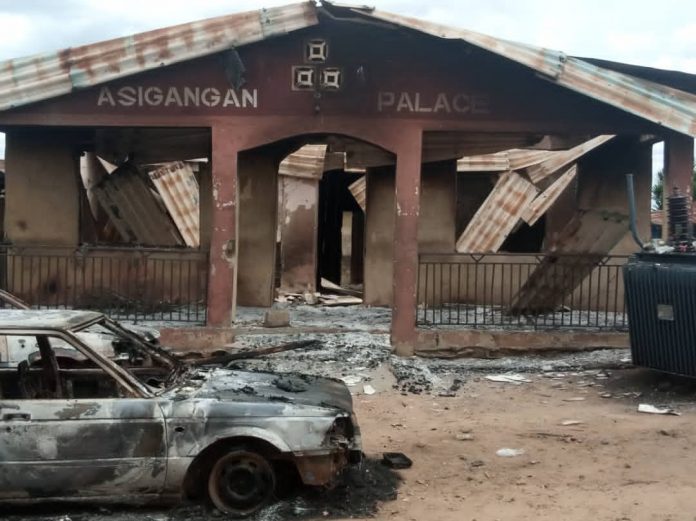 Several indigenes of Igangan town in Ibarapa Zone of Oyo State were killed by bandits suspected to be herdsmen on Saturday, June 5, 2921, at about 11pm.

Thenewsbearer learnt the bandits also invaded houses, petrol station and palace of the town’s monarch when everyone was asleep and started shooting and slaughtering the indigenes.

They also set ablaze houses, a filling station, the palace of Asigangan of Igangan, several vehicles and property before escaping, after using darkness as cover for the grissly operation.

Some of the bandits were also said to have been caught in their web as they were brought down during the shooting.

A few days ago, the chairman of Amotekun Corps, General Kunle Togun (retd), had given an alert on the planned invasion by bandits to wreak havoc in the South West.

Thenewsbearer learnt that Igangan indigenes, irked by the wanton killings and destruction, almost burnt the police station in the town, protesting against their not being allowed to bear arms, while they decried a situation whereby they were being put at the mercy of the attackers who had been committing atrocities against them through kidnapping, murder, robbery and rape of their women.

Thenewsbearer further gathered that about 24 hours before the Saturday onslaught, two farmers were killed in the early hours of Friday, June 4, with their bodies recovered by the police in the morning.

The State Commissioner of Police, Ngozi Onadeko had visited the town on Sunday to assess the situation and calm the frayed nerves of the indigenes.

Meanwhile, the command’s Police Public Relations Officer, DSP Adewale Osifeso, has said 11 people lost their lives in the brutal murder committed by the bandits, contrary to the numbers being spread in the media.

According to Osifeso in a statement on Sunday, June 6,
the police commissioner had also deployed tactical operatives to Igangan.

Giving an insight into the killings by bandits, the PPRO said: On 5th June, 2021, at about 2310hrs, suspected armed bandits in their numbers invaded Igangan Community in the dead of the night to unleash mayhem on unsuspecting members therein.

“In the process, 11 persons, including some of the assailants, were confirmed dead, while a number of vehicles and buildings including the palace, of the Asigangan of Igangan town and a filling station were torched.

“Consequent upon the unfortunate occurrence, the Commissioner of Police embarked on an on-the-spot assessment today, 6th June, 2021, to critically evaluate the level and cause of damages on the various sites of killings and arsons.

“Intelligence and tactical apparatuses, consisting of Police Mobile Force personnel, patrol units and other tactical teams, in concert with local hunters and vigilantes from the community were deployed to forestall further disintegration of law and order in the area.”

Expressing condolence to the families of the deceased, the police commissioner promised that justice would be made to prevail.

She also appealed to the people of Igangan community to trust the system and shun self-help by obtaining justice through partnership with the police, by prompt sharing of intelligence relevant in the ongoing investigations.