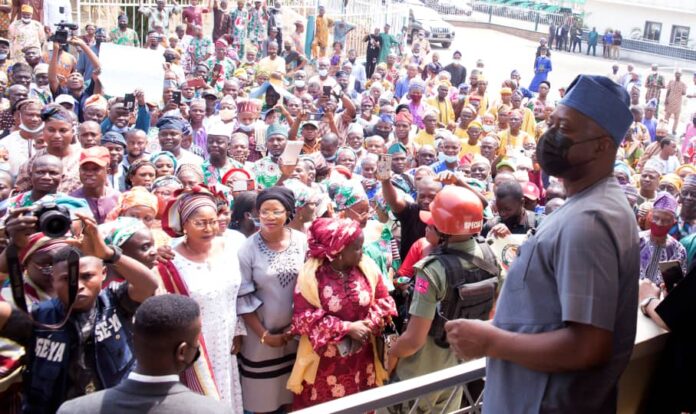 Governor of Oyo State, Seyi Makinde, has said that his administration will continue to use the state’s commonwealth for the good of the people in all the nooks and crannies of the state.

The governor, who stated this on Tuesday, January 18, 2022, while receiving hundreds of members of the Iseyin Development Union, led by His Royal Majesty, the Aseyin of Iseyin, Oba Dr. Abdul-Ganiyy Salaudeen, said all zones in the state would witness rapid development under his watch.

A statement by the Chief Press Secretary to the governor, Mr. Taiwo Adisa, indicated that Iseyin residents, led by the Aseyin and well-meaning indigenes of the town, paid the solidarity visit to the governor at the Government Secretariat, Agodi, Ibadan.

Addressing the Iseyin people, Governor Makinde maintained that the residents and those of other towns in the state should expect more monumental projects across the state, adding that these projects would welcome new faces and bring development to the state.

He explained that the only thing his administration could do would be to leave the state better than it met it, calling on all and sundry to join hands with the government in its bid to develop the state.
Governor Makinde, who promised that his administration would continue to spread out and develop the state, said: “I am overwhelmed by this show of appreciation and the reason is that you are acknowledging the works I have been doing since I came into government.

“Indeed, it is your money that is working, not the money of Seyi Makinde’s father. It is our commonwealth, and the essence of government is to use the commonwealth for the common good of our people, and this is what we will continue to do as an administration.

“The only thing we can do as a government is to leave the state better than we met it. And, fortunately for my people in Iseyin, where the geography places Iseyin zone, you can accommodate.

“You can see that the journey from Moniya to Iseyin is just 45 minutes now, and it means that someone can be working at Secretariat and come from Iseyin every day. So, it is not necessary that all of us must squeeze ourselves inside Ibadan. “We want to spread out and develop the state as a corridor for all the zones in Oyo state.

“Let me plead with you that development is still ongoing and the government is doing what it is supposed to do in terms of infrastructure.

“The development will come naturally from investors but what we need from you is your cooperation with the government.

“Among the projects we want to carry out is the Trans Motel in Iseyin, which should have been done. But there are few people who are constituting themselves as clogs in the wheel of progress. Baba, please we want you to talk to them because we want nightlife in Iseyin. We want those traveling to Ado-Awaye to have the opportunity to stay and spend the night at Iseyin.

“Once the university also takes off, we need places for people to sleep. So, join hands with the government.

“If the economy becomes expanded, there won’t be poverty in the land. So, I want you to visualise what is coming. Iseyin is being linked to Oyo and when the road is completed in six months’ time, it will only take 20 minutes from Iseyin to Oyo. Iseyin is being linked to Ogbomoso and when the road is completed, it will be a maximum of an hour. So, we should expect an economy that will welcome new faces and development.

“Within 20 years, my focus is to make Iseyin link up with Ibadan. So, I want you to be prepared that development is almost at the arrival point to Iseyin and Oke Ogun zone.

Earlier, the National President, Iseyin Development Union, Alhaji Bayo Raji, said that the visit was to thank the Governor Makinde-led administration for the various monumental projects across Oyo State and especially in Iseyin and Oke Ogun land, which include; the completed Iseyin-Moniya Road spanning 65 kilometres, which link Ibadanland and Oke Ogun; location of LAUTECH College of Agriculture and Renewable Resources in Iseyin; the ongoing Iseyin-Oyo Road construction.

Others, he said, included the recently approved Iseyin-Fapote-Ogbomoso road and the street light electrification at three strategic locations within the Iseyin metropolis as well as the completion of the Saki Township Road and the ongoing Saki-Ogbooro-Igboho Road construction.
Raji added that the government has equally completed various abandoned projects across the state, noting that the state has never had it so good since independence.

He maintained that within two to three years, the present administration has laid new standards for governance, saying:

“With what your administration has done, we are assured that the future of Oyo State will be better.

“We cannot thank you enough. But we shall continue to pray for you and your government for redirecting the state policy, showcasing modern standards, and serving as a model in leadership, governance, and party management.”

Also speaking, Senator Gbenga Babalola, appreciated the governor, saying that the people of Iseyin could not but identify themselves with Makinde, who he described as an uncommon governor, a promise keeper.

“We cannot but identify ourselves with you. When you were seeking election, we were skeptical because we have always been inundated with promises that were never kept. But since you became governor, you have shown fairness. You have inculcated fairness in governance.”

Babalola equally declared that as a mark of appreciation to the governor, the Iseyin community has decided to confer on the governor and his wife the titles of Aare Atunluto and Yeye Aare Atunluto of Iseyinland.