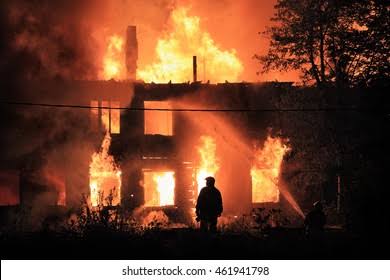 A line from William Congreve’s 1697 poem: ‘The Mourning Bride’ says “Heaven has no rage like love to hatred turned, nor hell a fury like a woman (man) scorned.”

The poem came to the fore when a man, Ahmed Saka, carried out his threat to end his ex-lover’s life and his own on Wednesday, April 7, 2021, when he set the woman’s room ablaze at about 1:50am, killing the mother, two children and injuring four others with severe burns in Ibadan, Oyo State, for ending relationship with him.

Saka was not spared, as he later succumbed to injuries he also sustained in the fire incident.

Thenewsbearer learnt that the woman, Mutiat Oladele, and Saka, who lived in the same house at Shogoye area, Idi Arere in Ibadan, had been lovers, before she told him she was no longer interested in the relationship..

Credible source informed Thenewsbearer that that Saka was not happy with the severance of the relationship, making to threaten the woman that he would kill her and end his own life, if they could no longer be together.

The threat was carried out on Wednesday, resulting in the death of five, including the woman, two children and Saka, while four other children were severely burnt in the inferno.

Apart from Mutiat and Saka, two children who lost their lives were identified as Ramon Sarumi (10) and Abiodun Oladele (seven).

The names of the injured ones were given as Bisola Oladele, Lateef Sarumi, Aishat Sarumi and Wosilat Sarumi.

It was learnt that the matter was reported at Mapo police station by one of the neighbours, Olaide Aliu at about 5:10am.

This led the Divisional Police Officer in charge of Mapo and other detectives to visit the scene.

After taking photographs, the police operatives also evacuated the corpses from the scene to the mortuary of State Hospital, Adeoyo, Ibadan, for autopsy.

The injured ones were however taken to Anglican Diocese Hospital, Molete, for prompt medical treatment.

When contacted, the state police spokesman, CSP Olugbenga Fadeyi confirmed the story, adding that an investigation had commenced into the matter.