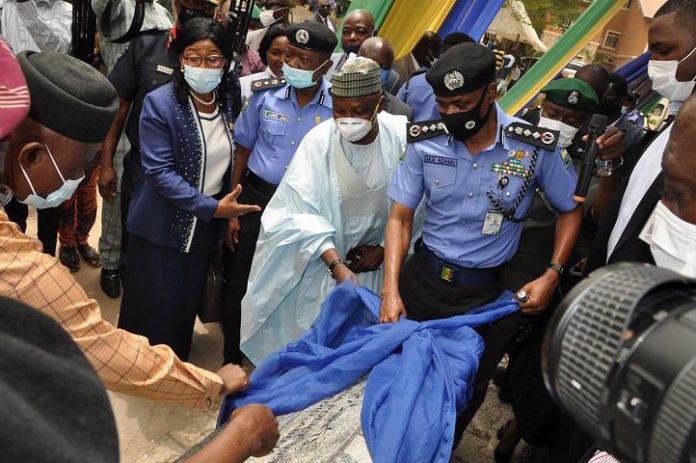 In his speech, the IGP, who inaugurated the radio station with 99.1 Frequency Modulation (FM), on Wednesday, March 31, 2021, also said that it was an occasion of professional fulfilment.

Adamu noted that on his assumption of office as the 20th indigenous Inspector General of Police, “we introduced some strategies to combat crimes and stabilize security across the country.

“As part of the implementation processes, we appreciated the need to bolster partnership and good working relationship between the police and the people in our various communities.

“One of these strategies is the construction and set-up of this community-based radio station – the Nigeria Police 99.1 FM Radio – which is targeted at bringing the police closer to the people.”

Expressing appreciation to President Muhammadu Buhari, “for the Federal Government’s commitment to the security and safety of Nigerians, and the support for the Nigeria Police in the enhancement of our operational capacity,” the IGP said that The Nigeria Police 99.1 FM Radio Station “is a product of this laudable gesture.

“And it is within the vision of our Community Policing initiative, which emphasises smooth information flow towards strengthening the bond between the citizens and the police.”

Adamu stated further that the radio station had commenced test transmission, in line with the National Broadcasting Commission (NBC) code and operational regulations.

He added radio station would serve as a veritable avenue for the Nigeria Police to engage, enlighten and inform the public on policing activities and other security-related matters.

“It will also air phone-in programmes, to involve the citizens in the security of their localities, especially on ways to spot and report crimes, and other necessary steps to take in the event of a crime or security emergency.

“From this moment, there will be interaction and people-oriented programmes which would help strengthen police-citizens relations and serve as a trusted point for resolution of complaints by citizens,” he further remarked.

He extended gratitude to the National Broadcasting Commission (NBC) for joining forces with the Nigeria Police Force in actualising the vision of the commencement of the radio station, by granting the NPF radio operational licence and frequency to transmit as a community radio.

Adamu also thanked the leadership of the Federal Radio Corporation of Nigeria (FRCN) and other private and government radio broadcast service providers, for offering mentorship to the staff officers of the radio station, which ensured hitch-free take-off of operations.

“I assure Nigerians that the Nigeria Police Radio will pave way for continuous proactive policing in the country, and will further strengthen the bond between the police and the people.

“I also want to reiterate our commitment to the fight against crimes, protecting lives and property, preserving law and order and upholding fundamental human rights as enshrined in the Constitution,” the IGP said.

Force Public Relations Officer, Frank Mba, a Commissioner of Police, said in a statement that the Deputy Senate President, represented by Dr Otive Igbuzor, and the Chairman Senate Committee on Media and Publicity, Senator Ajibola Basiru, graced the occasion.

Mba added that the lawmakers pledged the support of the National Assembly to the continuous reform of the Nigeria Police.

Also in attendance at the commissioning were members of the Force Management Team, the Senior Special Assistant to the President on Media and Publicity, Garba Shehu; Director-General, National Broadcasting Commission, Dr Iganmu Onoja; Director-General, Federal Radio Corporation of Nigeria (FRCN), represented by the Director of Programmes, Mrs Msurshima Kighiv; members of the diplomatic community, top brass of the military, law enforcement agents and the security community, among other dignitaries.