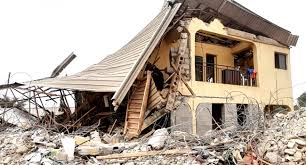 Delta State Police Command has said that contrary to reports making the round that 10 people died in the collapse of a building housing Salvation Ministry in Okpanam, Oshimili North Local Government Area of Delta State, four people lost their lives in the incident.

The casualties involved were two women and two children.

The command’s spokesman, DSP Bright Edafe, who gave the clarification on Wednesday, January 12, 2022, said that 18 persons were initially rescued, with four of them discharged and others still receiving treatment.

He also stated that the rescue operation was over, enjoining people to ignore the rumour of casualty figure being peddled.

Thenewsbearer learnt that the church building collapsed at about 5:55pm on Tuesday, January 11, during service, with some worshippers trapped in the rubbles.

State firefighters and a team of policemen were mobilised for rescue operations, as worshippers and family members searched for loved ones.

Officials of the state government, including Secretary to the State Government (SSG) Chief Patrick Ukah; Commissioner for Health, Dr Ononye Mordi; team of Red Cross officials and firefighters were reportedly at the scene.