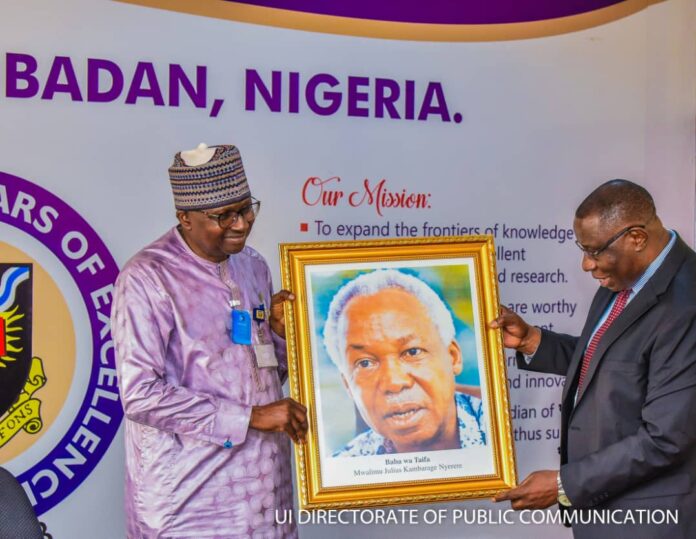 The government of the United Republic of Tanzania through its High Commissioner to Nigeria, Dr. Benson Alfred Bana, has praised the University of Ibadan for its recognition of the activities of Tanzanian anti-colonial activist, politician and political theorist, who was the President until 1985, Julius Kambarage Nyerere, by awarding him a Doctor of Law (Honoris Causa) in 1976.

Dr Bana expressed the appreciation of the people of Tanzania when he was received by the Vice-Chancellor of the University of Ibadan,  Professor Kayode Oyebode Adebowale, in his office on Tuesday, May 10, 2022.

According to the premier university’s spokesperson, Joke Akinpelu, in a statement, the High Commissioner noted that the singular act by the first and the best University in Nigeria to recognise the immense contributions of the late sage to the cause of Pan Africanism and Humanity gave him a strong reason to visit the University of Ibadan to express the appreciation of his country for the bold and revolutionary decision of the then leadership  of the University to recognise the father of the United Republic of Tanzania.

Dr Bana said Tanzania celebrated the 100th post-humous birthday of President Nyerere on April 23, 2022, adding that the country is also celebrating its 60th independence anniversary in 2022.

He called for robust bilateral relations between his country and Nigeria.

The Vice-Chancellor, Professor Kayode O. Adebowale, thanked his guest for looking into history to remember the efforts of the past.

He alluded to the unity enjoyed by the people of the United Republic of Tanzania which according to him, might be largely due to Swahili as a national language spoken by all including the elite and illiterate.