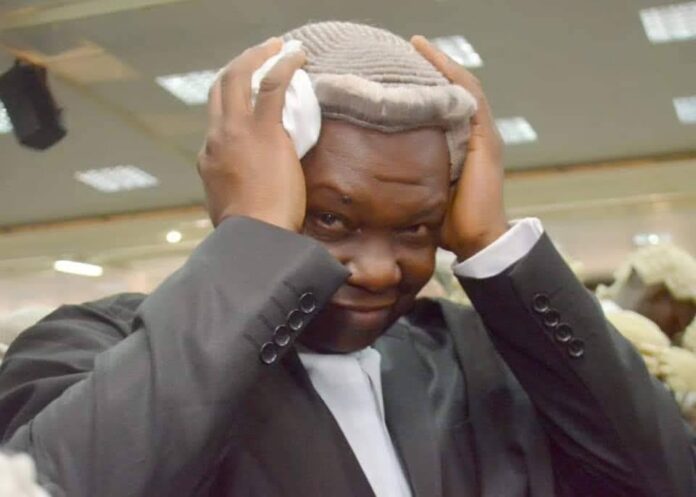 Last Thursday, when the Chairman of the Economic and Financial Crimes Commission, (EFCC) reportedly slumped at the Presidential Villa, Abuja, the story of the late enfant terrible of Oyo State politics, Busari Adelakun, sidled into my memory. Media reports said that Bawa slumped at an occasion commemorating the National Identity Day.

Same last week, Nigeria was back to her English class session. Occasionally, some fortuitous occurrences force this country, a product of Mrs. Flora Shaw’s taxonomic ingenuity, to go learn some basic language meanings. This time, Nigeria had to contend with the difference or differences between “slump” and “somersault.” Questions that confronted Nigeria and needed answers were, in their specifics, what exactly does anyone mean when they say something/someone had slumped or somersaulted? What is a slum? Is a slum a slum because it bears stench akin to Bethlehem’s – Jesus birthplace’s manger – or it is a stench because it has the noxious smell of sewage?
While on the podium speaking on the importance of digital identification, Bawa was said to have manifested physical signs of delirium. From the video of the event in circulation, the EFCC chair momentarily contorted his face like one struck by an unseen lightning. It was not clear whether this was due to exhaustion or an emotional trauma. He had painfully recounted the death of an employee of the commission he didn’t name. Upon walking away from the stage and taking his seat, Bawa was said to have fallen. Assisted up by Minister of Communications and Digital Economy, Isa Pantami, Bawa was spirited out of the hall. In confirming the incident, EFCC, through its spokesman, Wilson Uwujaren, said the fall was a mere “incident” where Bawa “felt unwell and had to return to his seat.”
I just recently re-read Peter Morton-Williams’ anthropological study of the Ogboni, the dreaded ancient Yoruba secret cult, entitled The Yoruba Ogboni cult in Oyo. Apart from its outline of the potency of blood in sacrifices and oath, written way back in 1960, Morton-Williams’ is a study in what probably drives interests in secret societies and why the elite take unqualified voyage into it, in spite of rapacious embrace of Christianity and Islam. It also explains why the Ogboni still has controlling importance in Yoruba religious organization, centuries after it was established.

If you add this to analyses of celebrated poet, Gabriel Okara’s Piano and Drums, a poem that evocatively brings out the effects of clashes between Western and African cultures, you will realize the reason and nature of some snide comments attributed to Bawa’s slump on the social media. It is why pastors visit the Sangoma, babalawo or dibia on weekdays and speak in tongues at the pulpit on Sunday in African churches. As news of his slump trended on social media, some commentators asked if the young EFCC czar was being pursued by some traducers who were angling for his seat. As is the nature of Africans who never believed disasters, calamities, sicknesses or diseases have singularly physical, biological connotations without corresponding metaphysical underlining, many of the commentators didn’t believe that the EFCC boss slumped because he merely “felt unwell.”
Adelakun was a firebrand politician of the Second Republic, a politician who fellow politicians could ignore only at their peril. First, he enfolded traditional African Yoruba culture and symbols of rituals into modern practice of politics. He demonstrated this in his politics and never hid the fact that he was in touch with rituals. Born in the Ejioku area of Ibadan, Adelakun began peddling his political trade from the days of the Action Group of the First Republic. When the Unity Party of Nigeria (UPN) was founded, he became trapped in the turbulent politics of the era which was just a transpose of the earlier republic. He actually began his politics from the Ibadan Peoples Party (IPP) days, with the stormy petrel, Adelabu Adegoke in charge. After the republic was collapsed by a military coup which dissolved it aftermath the chaos of the Western region, Adelakun went back to farming and also joined a farmer’s union, becoming its president.
Barely educated though, in 1979, Governor Bola Ige of Oyo State appointed Adelakun commissioner for local government. He was redeployed to the health ministry two years after. Adelakun however exited the UPN under a chaotic circumstance and, with Sunday Michael Afolabi, joined a faction opposed to Ige. He later decamped to the National Party of Nigeria (NPN), swearing to dislodge Ige, which he accomplished. To achieve this, he supported and eventually achieved the enthronement of Chief Victor Omololu Olunloyo as governor to replace Ige.

While leaving the two ministries he was commissioner, Adelakun became a mythical figure due basically to how he flaunted his grips of esotericism and the deep metaphysics of traditional Africa. He was reported to have famously sworn that since any cloth worn by Ipin leaf could never be worn by any human being again on earth, no one could step into the office he was leaving. Ipin is a leaf that farmers dread in the forest like a plague. Bodily contact with it was akin to being bitten by a scorpion.
True to his boast, Adelakun’s immediate successor in the Ministry of Local Government and Chieftaincy, Lasisi Olatunbosun, died shortly after being sworn in. The trope that gained traction was even that Olatunbosun’s buttocks got irretrievably glued to the seat Adelakun used in office. Again, his successor as commissioner in the Ministry of Health also died, allegedly of stroke. In Yorubaland, until of recent, stroke was held to be a metaphysical attack that was always the handiwork of traducers. Jailed in 1984 by the Buhari military regime, Adelakun took ill in prison and died at the Lagos University Teaching Hospital. Some people believed that his death was quickened by his inability to offer propitiations to grooves and gods who gave him his mythical legend.
Aside the slump of the EFCC Bawa, not a few things have been slumping and doing acrobatics in Nigeria recently; acrobatics like the famous Atilogwu dancers’. Like the Nigerian Naira, for example. Right now, the Naira has snatched the most notorious of national infamies available. The way Almighty Naira kisses the canvass, rather than a cry, it provokes laughter and enchantment one gets while watching Atilogwu. Some hilarious economic analysts claim that the Naira’s somersault is like a kiss of death. The Naira is engaged in one of the most flip-flop numeric dances of a national currency ever in the history of a nation.
One minute, the Naira is standing ramrod on its feet (though you would be right to say Naira lost its ramrod posture since the early 2000s or so, and has shamelessly lay prostrate, especially since the coming of this government). The next minute, that ramrod posture vanishes, in a meteoric rise that makes you remember Hubert Ogunde’s famous song, Iye le o ma wo. Ogunde, in that track, sang that the person who fixes his gait on a bird will in the next minute see feathers at the bird’s talon. Never the bird again – iye le o ma wo lehin eye o, e o l’eye ri… Ogunde was probably trying to localize Greek philosopher, Heraclitus’ famous dictum.  Because no two situations are exactly same, Heraclitus then surmised that you cannot step into same river twice, simply because life is woven round a tapestry called change. It is so bad that if Godwin Emefiele; sorry, the Nigerian Naira, greets you “good morning,” you have to look through the window to confirm. Naira’s duplicity could be benumbing. When you think you see an outwardly shining currency, bearing the totems of a people bound in freedom, peace and unity, all you see are feathers… a currency as light as feather or is at best a mirage, holding the values of what my people describe as a mere idandan.

Pardon my scant sense of hierarchical positioning. Long before the Naira, the Muhammadu Buhari government’s sense of taxonomy was the first to do acrobatics. With blood flowing from victims of notorious Fulani herders on the streets of the Southwest, Southeast, Northwest and some parts of the South-South, a furious Buhari couldn’t stand the bloodshed. What! He shouted. Then rockets of fire began to sound somewhere across the River Niger bridge. There was also some burning, some maiming and hoopla gone haywire. Then Buhari sat by the panes of his imperial castle in Aso Rock and decreed a label. Those who downed military fighter jets in the Northwest, who kill in their hundreds, who rape multiple of our children, are just bandits, Buhari proclaimed. Those “dots in a circle” children are terrorists, sons of Osama Bin Laden, so said the imperial taxonomist. QED.
Bothered by the success that advocates of separatism are recording, especially in getting the United Nations to listen to their plea that they are consistently being bayoneted by the Fulani-led government of Nigeria, Buhari somersaulted into what is called the fallacy of generalization. This fallacy is a pitfall in logic and reasoning that results from a faulty umbrella covering of an issue. It is an informal fallacy where an argumentator draws a conclusion about a phenomenon based on one or few instances of that phenomenon, by jumping into a wonky conclusion.
That same Thursday last week, presidential spokesman, Garba Shehu, said that Buhari was “shock(ed) to see ‘Yoruba Nation’ advocates throwing their lot in with the Indigenous People of Biafra (IPOB) and organising ‘increasingly violent rallies in Nigeria.” He said that “IPOB is a designated terrorist organization,” and “has now publicly revealed a 50,000 strong paramilitary organisation. It regularly murders security services and innocent civilians, with a significant uptick of violent attacks this year. And it is currently attempting to hold Nigerian states hostage with orders to stay at home under threat of terror. Without doubt, Nigerians and the entire world will judge Yoruba Nation by the company it keeps.”
This somersault or slump of the Buhari government is phenomenal and equal to a governmental performance of what I call a labeling gymnastics. While what unites both Yoruba nation agitators and IPOB is known to be that both want separate countries peacefully carved out of Nigeria, while Yoruba advocates have never been known to have shed even a pint of blood, IPOB dissociates itself from the maladies of the region in the name of Biafra. Even at that, none of the two has a quarter of the notoriety of bandits whom Buhari, in his taxonomic somersault, is cladding in the euphemism of banditry, to avoid western nations’ assault on it, probably.

That same week had barely ended when Femi Fani-Kayode, former Aviation Minister, literally swallowed his own vomit by joining the All Progressives Congress, (APC) a political party he had always viscerally attacked. Responding to the posting of this dispiriting news on Facebook last week by presidential media adviser, Femi Adesina, I could only borrow late Professor Pius Adesanmi’s quip on another slump by a top-rate media icon when he merely wrote “And Jesus wept” to qualify the calamitous somersault into the slum.
Slumping and somersaulting into the slum are regular features in Nigeria. Whether the slump is that of taxonomy for selfish purpose by Buhari or it is a moral somersault like that of Fani-Kayode or it is even a literal slump like Bawa, or the calamitous somersault of the Naira into the abyss, values are compromised. It is as if we are a country where morality is on sabbatical.

•Dr Adedayo is a lawyer, social critic and columnist.