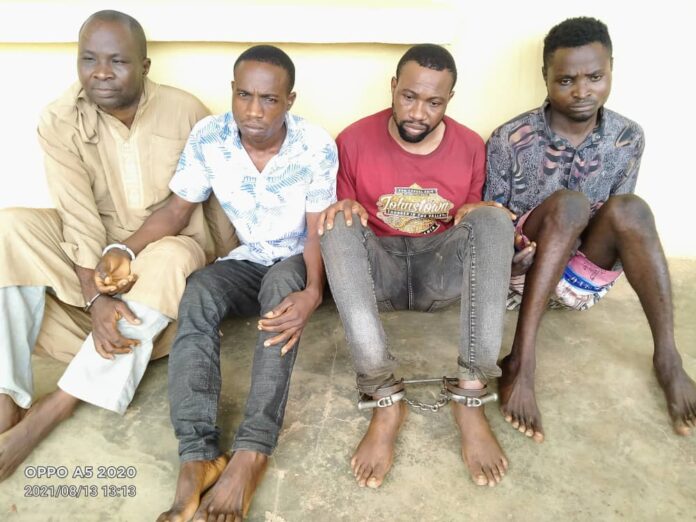 When an operator of Point of Sale (PoS) machine, Abiodun Odebunmi, got a call from a supposed customer on April 17, 2021, to bring him a cash of N4 million, he had thought that it was a boost to his business, unknown to him that the meeting with the customer would end his life abruptly.

But as his killer and his gang members carried out their dastardly act in exchange for his money, they thought that their tracks were well covered, until detectives in Ogun State Police Command fished out and arrested four suspects who were principal to the killing of the victim. And that was when it was also discovered that another of the suspects’ area of specialty was in robbing and killing Uber cab operators as well, aside PoS operators.

Disclosing the bizarre act of the suspects, the Police Public Relations Officer in the command, DSP Abimbola Oyeyemi, said that the report of the death of the victim was brought to the notice of the police at Onipanu Divisional headquarters by his shop attendant, one Ms Aanu Salaudeen, on April 18, that her boss left his office at Aparadija the previous day to meet with a customer with a cash sum of N4 million, to be used for PoS transaction.

She stated further that the said Abiodun Odebunmi had not been seen since then, and all calls made to his line had not been going through.

The PPRO said that the report made the policemen at Onipanu to commence an investigation into the sudden disappearance of the man. Their efforts paid off when the dead and burnt body of the victim was discovered in an uncompleted building at Arobieye area of Ota, without the trace of his assailants.

He stated further that the case was transferred to the homicide section of the State Criminal Investigation and Intelligence Department on the order of the Commissioner of Police, Edward Awolowo Ajogun, who mandated the homicide team to get the perpetrators within the shortest possible period.

The CSP Femi Olabode-led homicide team, in compliance with the CP’s directive, embarked on technical and intelligence-based investigation, which led them to Otun Ekiti in Ekiti State, where one of the suspects was found to be hibernating.

When the detectives got to Ekiti, Oyeyemi said that the suspect somehow got wind of their presence and quickly escaped to Offa in Kwara State, but with the determination to apprehend him, the team continued trailing him until they later got information that he was in Benin Republic where he had gone to attend the court session of Chief Sunday Adeyemo a.k.a Sunday Igboho, with the assurance that he would soon be returning to Nigeria.

This, Oyeyemi stated further, made the team to lay an ambush for him and got him arrested at the boundary of Ogun and Lagos states.

“On interrogation, Kehinde Salihu Jeili, who claimed to be a native of Apomu in Osun State, confessed to killing the victim. He admitted further that he deliberately lured the victim to Ota where he and his gang members were waiting for him to come with the money he was asked to bring, having transacted N1.5 million business with him the previous day.”

The suspect spoke of how they inflicted machete cuts on their victim until he died, after collecting the money from him. He also stated that they burnt the victim’s body in order to cover their tracks.

Pouring out his confession like a nightingale, Jelili also revealed that their targeted victims were always Uber and PoS operators. Explaining the gang’s modus operandi, he said that one of them would pretend as a passenger in the car of a Uber driver and lure him to where his members were waiting.

He said that the drivers were usually hacked to death immediately on their arrival at the planned spot, while the car would be taken away to their receiver.

The suspect went further that he and his gang attacked another victim, one Idowu Ademiluyi, at Itori area and snatched his Toyota Corolla car, having inflicted him with machete cuts to the point of death.

The PPRO said that it was the suspect’s arrest and interrogation that led detectives to their receiver, Abiodun Akinola, who is a standby buyer of every proceed of their crime.

The confessional statements of the two also led to the arrest of two others – Johnson Fakeye and Akinola Jamiu – at Atan Ota and Owode Yewa respectively.

Exhibits recovered from them included a Toyota Camry, a Toyota Corolla and one Toyota Rav 4 vehicles, which belonged to their owners who were gruesomely murdered by the suspects.

The Commissioner of Police, Ajogun, who commended the team for the painstaking investigation that lasted for almost three months, enjoined them to put more efforts until the last member of the devilish gang is arrested.

Ajogun appealed to members of the public to always disclose their movement to at least one trusted person whenever they need to keep appointments with unknown persons.

He said that the suspects should be charged to court as soon as investigation is concluded.