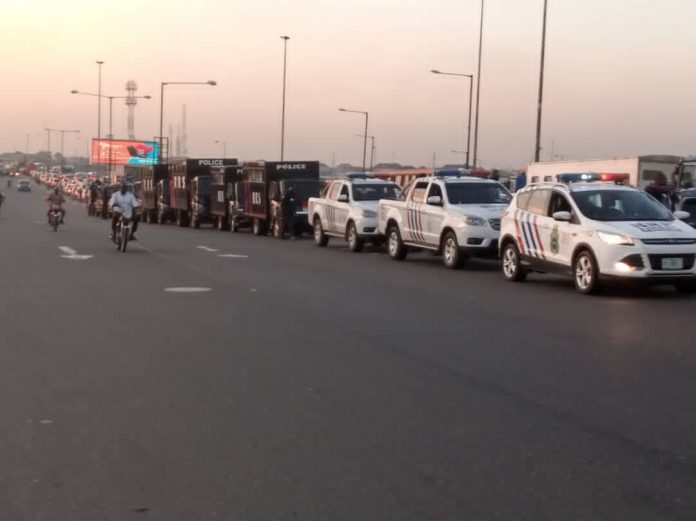 In a show of force across strategic locations on Thursday, June 10, 2021, the Lagos State Police Command went round with some of the security vehicles and gadgets which had just been received from the state government.

The show of force was carried out just after the commissioning of the equipment by President Muhammadu Buhari at the Police College,Ikeja.

The Rapid Response Squad (RRS) team, led by the Commander, CSP Yinka Egbeyemi, had used the opportunity to hit flashpoints at Agege, Seven Up/Ojota axis, Surulere to Eko bridge, where notorious traffic robbers and miscreants had been terrorising innocent motorists and commuters

This led to the arrests of 19 suspected traffic robbers, with the operation still ongoing and the squad currently mounting surveillance on Eko bridge.

Commissioner of Police, Hakeem Odumosu, had ordered the Area Commanders, Divisional Police Officers and tactical commanders, especially the Commander, RRS, to make judicious use of the newly donated equipment and decimate the activities of hoodlums at the identified areas across the state.

He further directed that additional traffic surveillance officers, with motorbikes, be deployed to the strategic places in the state in order to keep criminals at bay.

Odumosu also assured the general public of adequate security of lives and property in the state, while he orederd that the suspects be transferred to the Command’s Special Squad for thorough investigation.