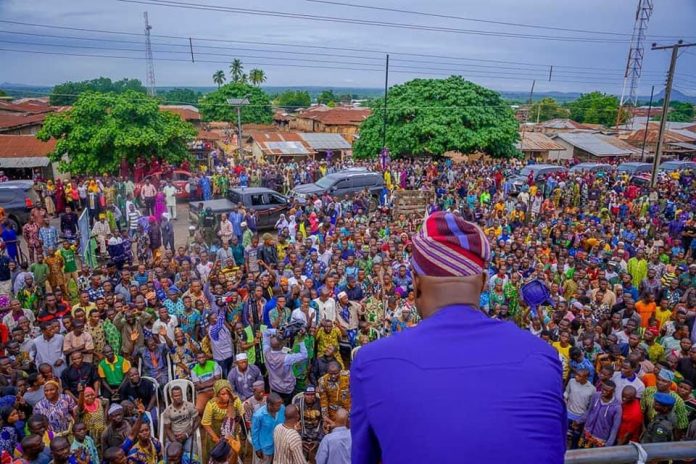 Governor of Oyo State, ‘Seyi Makinde, on Tuesday, June 8, 2021, promised to do everything within his powers to safeguard the lives of residents of the state by preventing a recurrence of violent attacks on the people of Igangan and other communities in the state.

Governor Makinde made the promise in Igangan Community in Ibarapa North Local Government Area, during a visit to the families of Saturday, June 5 attacks by suspected herdsmen, resulting in the gruesome murder of 11 indigenes.

The governor said that the state would empower local security guards and vigilantes, in addition to other measures that would be taken to ensure that insecurity becomes a thing of the past in Ibarapaland.

Chief Press Secretary to the governor, Mr. Taiwo Adisa, in a statement said that Governor Makinde, who was in Igangan with top government functionaries and the Speaker of the Oyo State House of Assembly, Rt. Hon. Adebo Ogundoyin, deplored the wanton destruction of innocent lives.

He added that the government had been able to identify areas where there were lapses, while he called on the people to give his government the opportunity to address the situation and put in place the right architecture that would enable them to return to their normal lives without fear.

“I have told your chairman that the government will be responsible for all the vigilantes and security guards. This is your government, please give me the opportunity to do the needful so that a meeting like this would not come up again.

“I urge you to give me that chance to make the issue of insecurity here become a thing of the past. Don’t take laws into your hands. We have identified where there are hitches. We are supposed to be going to our farms by now because of the favourable weather. But hold me accountable, I have nowhere to go.

“I believe there are some certain things we put in place, which we think would work but unfortunately, they did not work. Please, give me some time, everything will be resolved.”

Governor Makinde, who promised that his government would work through the sad situation together with the people of the community, declared that it would be the last time such a bad occurrence would take place in Igangan.

The governor said: “It is not a situation where there is any magic we can do. We have to work through this and work together through it. But I promise you, this is the last time anything like this will ever happen here. It is a promise I am making to you, and it is a promise I will come through with.

“Please, don’t take laws into your hands. I urge all the families that lost their loved ones to this attack, because sometimes, emotion can really be high. Please, give us the opportunity to resolve this and make this place better for you.

“You must have seen the Light-up project we embarked on. We are doing it for us to be able to see everywhere, whether it is day or night. Well, there are people who don’t want good for our state and country at large, but I believe that God will show us mercy.

“Once again, I beg of you, give us the opportunity to come back and rebuild things and put a more solid architecture such that you will be able to go to farms and do whatever you want to do without fear. But I should be held accountable. I am responsible for this and will do everything within my power to make sure that it will not happen again.”