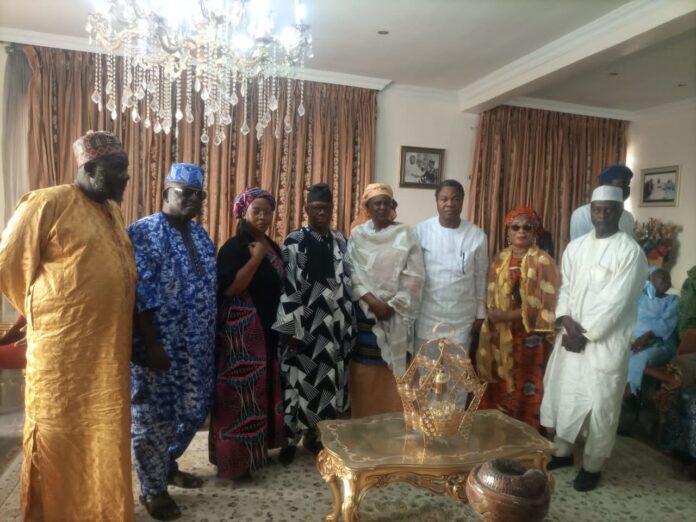 Senator Kola Balogun, on Saturday, January 15, 2022, paid a condolence visit to the widow of the late Soun of Ogbomoso, Oba Jimoh Oladunni Oyewumi, Ajagungbade III, Olori Olaronke Oyewumi and the children of the late traditional ruler.

Senator Balogun, who represents Oyo South Senatorial District, condoled with the family and urged them to strive to sustain the legacy of the late foremost traditional ruler.

He also led his team to the house of the late former governor of Oyo State, Otunba Adebayo Alao-Akala, to commiserate with the wives, children and other members of the family of the former governor.

This was contained in a statement issued, on Sunday, January 16, by the Special Adviser (Media and Publicity) to the senator, Mr Dapo Falade.

In his condolence message at the house of the late former Governor Alao-Akala, Senator described him as a God-fearing man who came, served, lived and allowed others to live their own lives.

Senator Balogun, who described his relationship with Alao-Akala as very cordial, said they were in constant communication up till a week before the death of the former governor.

“Oga, we spoke on phone less than a week before your demise. I thank God for your life. You came, you served, you lived and allowed others to live.

“May God grant you external rest. You were a God-fearing man. Rest in perfect peace, Oga,” Senator Kola Balogun wrote in the condolence register opened in the house of the late former governor.

Also, the chairman of SDM Tavern, Prince Adeyoju expressed sadness over the death of Otunba Alao-Akala, but added that his live is worthy of emulation.

“Egbon, your demise was so shocking to me. You left a legacy worthy of emulation. May you rest in peace in the bosom of our Lord. We are all going to miss you,” he wrote in the condolence register.